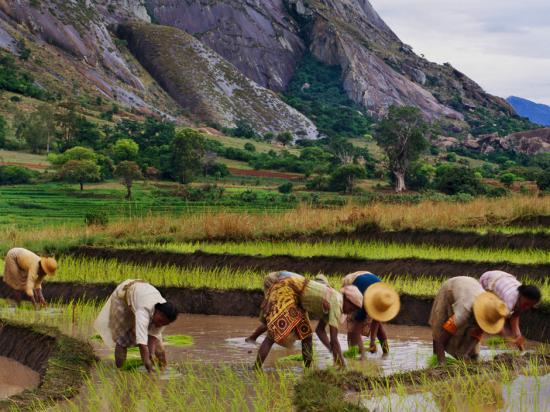 Outside of Asia, Madagascar has the longest history of rice production. Rice production systems in wetlands are well developed and rice terraces are frequently found along the roads between Antananarivo and Fianarantsoa.

During the southern winter, farmers do not have activities caused by this seasonality. They therefore carry out other activities such as brick making. All around big cities like Antananarivo, the capital, this activity is very important because it is one of the most creating jobs during the dry season.

Improved varieties of indica, of japonica and tropical japonica have recently been cultivated. However, rice yield has stagnated over the years 20 years due to the limited use of fertilizers.
Rice is the staple food of the people of Madagascar. In 2000, per capita rice consumption was 140 kg of brown rice. Many families eat rice three times a day, and most of the rice is grown locally. In certain regions, the "Ranonapango" – a beverage made from grilled rice – is reserved for special occasions.