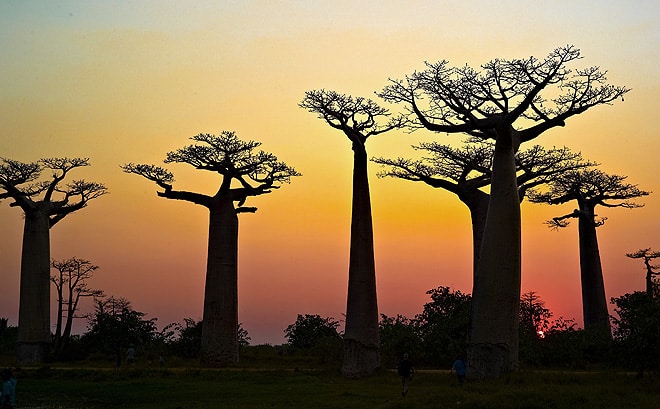 His Majesty the Reniala

The Baobabs of Madagascar

According to a local legend, the "Zanahary" found the baobabs a little too proud and to punish them, he replanted them upside down. Madagascar was still favored by the gods because it is the big island that holds the greatest number of species. On the 08 existing species, 06 are endemic. Besides, this is the only place in the world where one can find the baobab forests.

Baobab, Etymologically bottle tree ..., its name comes from the Arabic word "BU HIBAB" meaning "fruit with abundant seeds". In the local language they are called Zà, Zabe, Zamena, Zahamena, Ringy, Hazobetroka, Betroka, Renala or Reniala refer to its very small crown and the cylindrical shape of the trunk..

The spongy interior has a thick, reddish bark with a fibrous space containing an impressive amount of water. The Baobab can reach a height of 6 to 30 meters depending on the species. The leaves are present only 3 month in the year, in the rainy season and followed by a blooming period. These flowers then give large berries having a round or ovoid shape.. Fruits have a diameter of about 10 cm.

It is an eternal growing tree that can live to beyond two thousand years. The Adansonia digitata, native of Africa, offers quite a foliage as the Adansonia gibbosa from Australia, a small species rarely reaching ten meters. The six other, are endemic to Madagascar : The Adansonia madagascariensis, the Adansonia Za, the Adansonia grandidieri (which is most common in Madagascar) considered the most admirable of all bottle trees, the Adansonia suarenzensis and the Adansonia perrieri (Endangered, isolated in a small territory in the north) ; and finally the Adansonia rubrostipa (heart), the smallest species, from a height of four to five meter at most.

The baobabs are in danger, because of the intense deforestation that the great island is experiencing globally. the clearing, and of course, bush fires are also threats. From an ecological point of view, collecting fruits and seeds of this tree inhibit the growth. Furthermore, animal pollinators such as lemurs and bats are rare too. Ex situ conservation is a major asset for the survival of these trees that so emblematic of the great Island.